A Mississippi State University researcher has found that of the 16,000 first graders that he studied, those kids with strong religious homes were better behaved and happier than their peers. The study identified youngsters who had both parents attending worship services regularly and who talked to their kids regularly about religion as having strong religious homes. The study is reported on the web at https://www.christianpost.com/news/study-highly-religious-parents-have-better-behaved-kids.html.

Isn’t this is what the Bible has been saying all along?

Posted in Marriage and Family

Why Should I Invite?

Why should I invite? Oscar Wilde's Aunt Jane once gave a grand party. She died of embarrassment when nobody came. It was only at her funeral that it was revealed that she had never mailed the invitations.

People come to church because they are invited. It is one thing for us to logically see that point, and quite another thing to permit ourselves to actually issue an invitation.

We invite people to church because Jesus set the example and raised our expectations. You know the verse about "seeking and saving the lost" and "go into all the world." Our culture tells us "don't bug others," and "live and let live." The contrast between what society demands and what our Savior expects is clear.

We invite, not because it is easy or comfortable or acceptable, but because it is part of our role as Christians. A 19th-century philosopher told a story about a man seeing a sign in a store window in a small European town. The sign said, "Pants Pressed Here." He went in and started to remove his trousers. The clerk asked what he was doing. The man said, "I saw your sign and wanted my pants pressed." The clerk responded, "Oh, we don't press pants here. We just paint signs."

It says "Church of Christ" out in the front of our building. Do we serve him and others for Him, or do we just paint signs?

Evolutionists and other such so-called “scientists” are fond of making the claim that our universe just happened into being.  That somehow, in a way unexplainable, particles of matter just happened to come together and form the universe and all that it contains.  That life somehow evolved or came into being by the same pattern of development.  That is, all that exists is the result of pure blind chance.

“There is a story which dates back to the time when the statesman Benjamin Franklin was Ambassador of the United States to France.  While living in Paris, Franklin was a member of an elite literary social and scientific club.  At certain of the meetings of the intellectual group, atheistic sentiments were expressed, leaving the impression that only superstitious and uninformed still believed in GOD as the Creator of the universe.  At the next meeting of the group Benjamin Franklin brought a beautifully designed and executed model of the sun and our entire solar system.  The earth and the other planets were in their proper relationship to the sun and to each other and of appropriate sizes.  It was a masterpiece.  Upon seeing it, one of the sophisticated members of the club asked, “Who made it?”  Dryly, without the trace of a smile, Franklin responded, “No one.  It just happened.”*

Why is it that those who put forth such a doctrine, and those who believe it, can easily see the principle behind the model which Mr. Franklin had, but fail to see the same principle when applied to the real universe?  Why is it that they can easily understand that a watch or a car had to have had a maker, but think that this grand complicated universe in which we live, and all of the life contained therein, just happened to come about by chance?

“…They are like blind people leading other blind people, and all of them will fall into a ditch." (Matt. 15:14).

*The section quoted was taken from the book, “I Believe Because….” By Batsell Barrett Baxter, p. 54.)

The Spirit of Thanksgiving 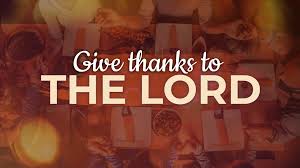 At times it seems like holidays exist solely for the purpose of selling merchandise.  Greeting cards, toys, candy, decorations. It’s no wonder that the Christmas displays appear after Halloween!  But, lost in all this shuffle, Thanksgiving seems to be almost overlooked.
We have pretty much developed a “tradition” for how to celebrate this day.  We get together with family or friends and “pig out”.  We eat too much and then sit around watching football on T.V. until dinner settles enough so we can eat some cold turkey sandwiches.  The next day we go out and battle crowds at the mall on the heaviest shopping day for the next holiday - Christmas!  While none of this is wrong, it has nothing to do with the intended purpose of Thanksgiving.
We have all heard the story of the first Thanksgiving when the pilgrims of the Plymouth Plantation gathered for a day of giving thanks in 1621.  The previous year had been an extremely hard one.  There had been bad weather, failed crops, disease.  Many of the original founders of the colony had died.   There was a growing feeling that they should give up and return to England.  During this time they had designated many days of fasting and prayer.  They determined to do so once more in late October 1621.
But an older, godly colonist challenged their thinking. He pointed out that even though times had been hard—God had blessed them!  This year it looked like food was going to be plentiful.  Many had died—but others had been blessed with children.  And above all else, they now had possessed that which was worth all the sacrifices they had made—their religious freedom.  “The time” he said, “was not for fasting and mourning, but rather to celebrate and give thanks to God.”
So that is the purpose for which the last Thursday of November has been set aside. To reflect on God’s blessings and give thanks to Him. How much will  “thanking God” be a part of Thanksgiving in America in 2013?  Not as much as it should be—yet, the spirit of Thanksgiving is the spirit with which God teaches us to live every day of our lives.
“Let the peace of Christ rule in your hearts, since as members of one body you were called to peace. And be thankful.  Let the word of Christ dwell in you richly as you teach and admonish one another with all wisdom, and as you sing psalms, hymns, and spiritual songs with gratitude in your hearts to God.  And whatever you do, whether in word or deed, do it all in the name of the Lord, Jesus, giving thanks to God the Father through Him.  (Colossians 3:15-17 NIV)
Note: “And be thankful...with gratitude in your heart...giving thanks to God the Father.”  This is the Spirit of Thanksgiving; this is the spirit of Christianity. (Author Unknown)

Get What You Can!

Some folks do not read the Bible because they say, there are so many things in the Book that they cannot understand. It is said that these things which cannot be understood trouble them. Of course, these are excuses.

What does one do when he sits down to a Southern-fried chicken dinner and finds there are bones in the chicken which he is unable to chew? Does he excuse himself, and say, "I can't chew the bony parts of the chicken, therefore I won't try to eat any of it?" Hardly. He merely puts the bones to one side and enjoys the edible part of the chicken. Why not put at least this much effort into Bible reading? (Author Unknown)

1 Timothy 4:13, “Until I come, devote yourself to the public reading of Scripture, to exhortation, to teaching.”